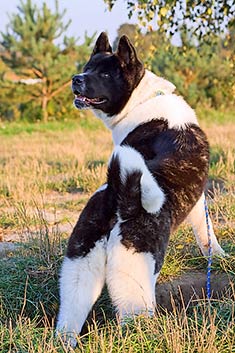 The Akita is a large and powerful dog breed with heavy bone, a muscular body and a strong, short muzzle. He has a powerful, brisk gait. Faithful and affectionate, the Akita loves human companionship. 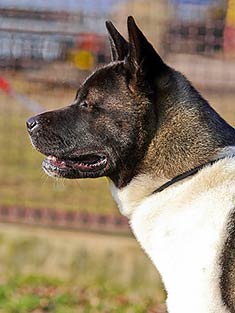 Akitas range from 24 inches to 28 inches.

Akitas' coats can be of any color including white, brindle and pinto.

Akitas have a straight, harsh outercoat and a soft, dense undercoat. Regular brushing is required to keep the coat looking neat.

The Akita is a friendly and affectionate dog breed. Early socialization is a must to be assured that the Akita will not become aggressive.

The Akita is susceptible to hip dysplasia, gastric torsion and eye problems.

The expected life span of the Akita is 10-12 years.

Akitas do best in a house with a fenced yard. The owner of an Akita should be an energetic leader in order to handle this large and powerful dog breed.

The Akita is in the Working group.

The Akita is the largest of the dogs surviving from ancient Japan, growing as large as 25 – 27 inches tall at the shoulders. Females weigh between 65 and 110 pounds while males weigh in at about 10 pounds more. Like other large dogs, they typically live about 10 years. Akitas are completely loyal to their family.

A nobleman who was exiled to the Akita Prefecture of Japan developed the breed in the 17th Century. The nobleman encouraged the land barons in Akita to compete in breeding a dog for hunting, resulting in the original Akitas. In its native Japan, the dog came to be seen as a symbol of good health, often being given to people who are ill or who have just had a baby, to bring happiness into their homes.

In danger of extinction

Several times throughout its history, the Akita was driven to near extinction by dog fighting, interbreeding, and a massive rabies epidemic in the late 19th Century. By the 1930's, the breed was so rare that the Japanese government actually subsidized dog food for Akitas if their families could not afford to feed them.

Helen Keller brought the first Akita to the United States after hearing the story of Hachiko, the faithful pet who waited by the train station each day for his master to return home. When the master failed to come home one day, the dog returned to the station each day for nine years to stand vigil, with station attendants feeding him until his death. A solemn ceremony is held at the train station each year in his honor. More Akitas were brought to North America by servicemen returning from World War II, and the breed's popularity surged in the mid-20th Century.

Originally bred to hunt large prey such as bear, elk, and wild boar, the Akita today retains its strength and courage. People may see this combination of strength and hunting ability as a danger, but Akitas are known for their strong, loyal ties to their families.

On the other hand, most Akitas are aloof towards strangers. They do not require all the attention, all the time, so people will not see them as friendly dogs. They prefer to approach a new person in their own time, rather than loping up to everyone they meet, hoping they have found a new best friend. Properly trained and socialized, they are perfectly safe.

The aloofness of the Akita has often been compared to how cats react to people. You've heard the old joke about how dogs come when they're called; cats take a message and get back to you. This seems to put the Akita more into the cat category, but the rest of the breed's personality is all dog.

Akitas have retained their hunting skills and may be aggressive towards small animals. They also do not necessarily get along well with other dogs, especially those of the same gender. The Akita definitely wants to be the alpha dog in any setting, and will not accept challenges to his authority from other dogs. The human family of an Akita must work throughout the dog's life to reinforce the idea that humans are alpha to all dogs, regardless of how the dog feels about that proposition. Akitas are good with children as they feel compelled to protect them.

The high attention of the breed to pack order dictates the Akita's response to perceived threats. In most homes, an Akita would quickly realize that the male head of household is the top dog, and may even accept the superiority of the female head of household. However, it is less likely that the children in the home will be assertive enough to convince the dog he is submissive to them. Akitas will treat anyone seen as "less powerful" as someone they should protect. Therefore, his loyalty will drive him to protect the children while not being as worried about perceived threats to the adults in the home.

This is where Akitas often get themselves into trouble. If a neighbor kid comes into your home and begins wrestling with your boys, causing lots of screaming, it is going to appear to the dog that your child is being hurt, and he is going to step in to perform his duty to protect your child. Although we would never advocate leaving a dog alone with children, some Akita families in Japan actually use the dog as a babysitter while the parents go off to work.

Early and thorough socialization is key

An awareness of the breed's protective character is required when you consider adding an Akita to your home. Breeders recommend that you thoroughly socialize young Akitas because you will never be 100% successful at keeping the dog isolated from situations where he feels he must protect his family. It is prudent to start socializing Akitas early in life.

Socializing is easier if you understand how all puppies learn acceptable limits for play. When puppies are with their littermates, they play by biting each other. When one of the puppies yelps, the others back off a bit, learning that they have played too roughly.

You can use the same technique to train your dog after you have brought him home. If the dog play-bites at you or your clothing, let out a loud yelp. When he lets go, praise him. If he does it again, yelp louder and push him away. You may even have to gently hold his muzzle closed and firmly tell him "no!" Always give the dog an appropriate toy to chew on when he lets go of you, to strengthen his knowledge of what it is okay for him to bite.

Modern Akitas have a small amount of retriever blood in them, which gives them softer mouths than most guard dogs like German Shepherds or Rottweilers. They don't have the same jaw strength, and are not likely to do as much damage when they bite. It may be tempting to allow the dog to continue to play-bite, since he is not really hurting anyone. However, you must establish the fact that no biting is acceptable or you may be in for real problems later on.

The Akita is easily bored because of his high intelligence. This, combined with his independence makes him somewhat difficult to train. He will not stand for forceful training methods, but will respond to positive motivational techniques. To defeat boredom, breeders recommend that an Akita do fewer repetitions of each skill in any one training session than would be presented to other breeds.

When they do bark, you should listen

Unlike other guard dogs, Akitas are not likely to bark unless there is truly an imminent threat. People walking down the street past your house don't count as a threat, so you will not get a lot of nuisance barking with this breed. When this dog barks, you can be certain something is going on that warrants your attention. Do you remember Nicole Brown Simpson's Akita who was said to have raised a terrible racquet after he discovered his mistress's body?

You may have also seen Akitas if you are a fan of animé. The breed has appeared in both the InuYasha and Digimon series. The dog also made an appearance in the musical Rent, where Angel is paid $1,000 to get rid of Evita, the Akita who lives next door.

In appearance, the Akita resembles other dogs that descended from the Northern Spitz-type dogs, with the tail that curls over his back, short erect ears, and double coats. This double coat requires minimal brushing most of the year, but when the undercoat "blows" twice a year, you could brush four or five times a day and still not keep up with it.

This loyal, powerful, and independent dog isn't for everyone, but if you are willing to make a commitment to socializing and training, an Akita can make a wonderful family pet and guard dog for many homes.