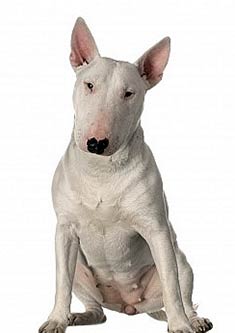 A small muscular dog, especially around the shoulders the Bull Terrier is distinguished by its muzzle. The head is flat on top and then slopes directly down to the nose. 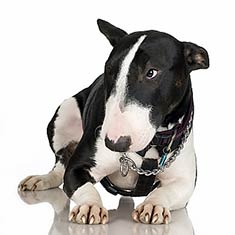 The Bull Terrier may be pure white, black, brindle, red, fawn or tri-color.

The Bull Terrier has a short thick coat and is an average shedder.

Prone to zinc deficiency, which can cause death, some are born deaf, with obsessive compulsive behaviors such as tail chasing. Some bloodlines are prone to slipped patella (dislocation of the kneecaps). Some male Bull Terriers have an overabundance of testosterone; this can be subdued with neutering.

The Bull Terrier can be expected to live about 10-12 years.

Bull Terriers need ample exercise or they will become lazy and overweight. When walking, this dog breed must be kept on a lead at all times as they will fight with other dogs. An apartment or small yard is sufficient living space for the bull terrier, as long as they are well exercised.

The Bull Terrier is in the Terrier Group